What is a cereal? A cereal is a member of the grass family cultivated for its grain.

A cereal is any grass that is grown for its its grain. Cereal grains provide more food energy than any other type of crop. A crop which is very important to the world's diet is called a staple crop.

The word cereal comes from "Ceres", the Roman goddess of farming. Cereals were first cultivated by the ancient peoples called the Sumerians in the area of the Middle East between the Euphrates and Tigris rivers.

Cereal grains in their unprocessed form are called ' whole grain', and are a rich source of vitamins, minerals, carbohydrates, fats, oils, and protein. Because of their high energy content, people on a diet are advised only to eat small amounts of them each day.

Processing cereals is known as refining. Refined removes the bran and germ from the grain, leaving a white substance that is mostly carbohydrate. We know it as flour, and it is used to make everything from bread to pizzas. Rice is often milled (put between rotating rollers) to remove its hard outer shell, but this makes it less nutritious.

People often call grains processed for breakfast 'cereals' because wheat flakes, bran flakes, puffed rice and so on are all cereal grains. 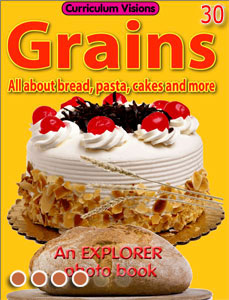